I wrote a post on July 3rd about the terrible meltdown we had with our Grow Camp Greenhouse.  I also mentioned we were not able to get a response from the US Distributor by phone or email.  We ended up going through Costco, where we originally purchased our Grow Camp Greenhouse.  We purchased the 4'x4', along with the 4'x4' extension, which is quite pricey, over $500, for the unit alone (this price is pretty standard regardless of where you purchase it.)  This doesn't cover the cost of the soil mixture, water system or garden plants.  So, the entire endeavor was closer to $1,000.  We felt at the time, well worth the initial cost, as we would use this garden greenhouse for many years, and heaven forbid, if it had to be moved for any reason, it could be.  We really didn't want to use a permanent brick and mortar structure. 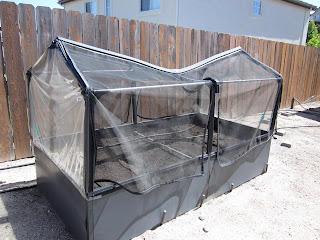 To refresh - here's what happened after only one year!!!  As you might guess, walking to the back yard and the two of us talking about what we were going to grow this year and finding this - well - to say we were stunned would be an understatement!!  We tried calling the US Distributor, no answer, no answering machine, no email response.  We called Costco.

I had been told by an employee last year when we were looking to buy a completely different item, after asking about the guarantee or warranty process with Costco, "Ma'am, the entire time I've worked here, if a customer has a problem with something they buy, all they have to do is bring it back.  No problems.  Costco stands behind the products they sell!"  Well, I don't know about you all, but I've been there, done that, and it's not always the case AFTER there's a problem!

I have to say Costco stood behind this product 100% and then some!  After one, only one, phone call to let them know what the problem was, we received an email saying they would be sending a truck to pick it up, ship it back, and we would be refunded 100%.  From the time we contacted Costco to the time we were refunded our money, was right around 30 days!  No problems, no stalling, just customer service that is outstanding!

I sure hope those of you who contacted me personally don't experience the problems we did, and that the ones you are experiencing can be easily resolved.

Here's what we've had built for our fall and winter garden -  and while it is made of stone, there is no mortar, just interlocking stone - this will work just fine! 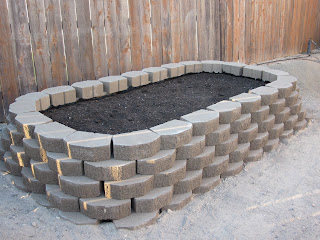 We found a Gardening Supply site showing how to build a PVC structure with some material used in the professional gardens in the Northeast of the US.  We figure if it will work there to keep the plants nice and warm, it will work well here on the Central Coast of California!  I'll show our handiwork when we finish this process.

On an other note, Ames Tiedeman, the US Distributor of the Grow Camp Greenhouse, actually contacted me via my blog email around the same time we were being refunded!  He wanted me to phone him, gave me his number, and when I called - I was told he would be out of the office for a week!  After emailing him and asking why I was being contacted and how he got my email, he wrote back and said, "We just want you happy!"

I'll be taking photos of the garden where we have our squash planted this year.  Our zucchini and butternut squash plants are really producing well this year!!  Yeah!!  We planted them in a more protected spot this year from the wind.  I'm making lots of zucchini bread and we'll have lots of winter squash!

Many blessings,
Donna
Posted by Donna at 10:00 PM

I Love My Followers ~ Please Follow on Linky at the Bottom of This Page, Too!

Donna
Central Coast, California, United States
Wife to my best friend and love of my life. Mom to one daughter and two sons who are grown and rewarded me five of the most wonderful grandchildren in the world. I love God, Family and Country. I support our troops and pray for our Country each day. This is the best place to live on the planet! We are all blessed to be here! Enjoy your time here visiting! Blessings! 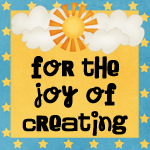 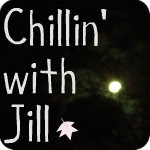